How I Spent My Snowed-In Weekend 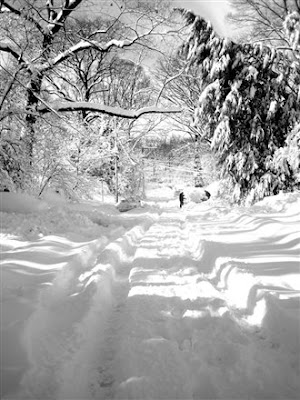 I'm a little embarrassed that I haven't posted my snow pictures, and to be honest, the pictures above and below are not mine. Oh well. Can't exactly brag about my photography skills anyway. (I was always on the other side of the camera, I b'lieve.)

I spent Friday night through Sunday afternoon working at a government agency. I may not be staff. I may not be highly paid. But it turns out that what I am is "essential personnel."

I think in my particular case, the promotion to "essential" came immediately after government managers learned that I lived less than half a mile from a MetroRail station that was two stops from their doors.

So I got a weekend sleepover with bad food, a cramped couch and coworkers possessed of weary, wonky and somewhat bleak outlooks. It was not the best, but to be honest, there were others who suffered far worse than my fate.

If you are looking for someone who is suffering under the 20+ inches of snow, this ain't her blog. I'm not particularly fond of snow, but my roof hasn't collapsed, my power isn't out and I haven't even tried to dig out the back steps.

In the absence of anything better, I've sort of adopted this attitude: 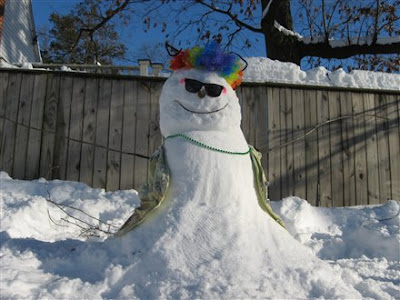 Yes, it has all been great fun, but nobody else seems to share my feeling. This is probably a "once-in-a-lifetime" weather event, but apparently while they're in it, not a lot of people are enjoying the ride.

By the way, my car isn't in this picture, but it does look a lot like these. 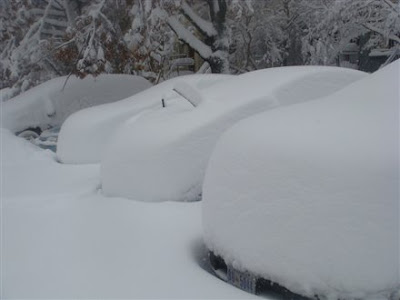 I was thinking that tomorrow, I might make a snow angel on my Ford Focus' roof, except I think three feet of snow angel plus a live human on top just might be the straw that broke the camel's back. Or caved in the car.

As for the forecast, we're expected to get another 8 to 20 inches in the next 48 hours, depending on who you listen to. I may yet spend another night (or three) on some government manager's spare couch.

So I have my pillow, an apple, a stash of Costco's finest Belgian Chocolates and the promise that "this, too, shall pass."

Unlike the truck below. 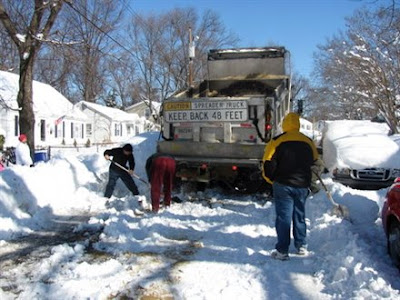 Because that, my friends, is a snow plow in Wheaton, Maryland on Sunday. It might still be there.

The pristine snow makes a beautiful photograph. Here we have lots of mud/slides in the foothills.
Do you miss us?
Enjoy the chocolates.

How can I miss you, Carla, when I get regular updates about the stake on email? I see you guys out doing your La Canada service project for the last couple of weeks.

I don't think I ever told you, I absolutely love your snowman! Whoever made it did a great job. :)