Have you ever felt as if you were dropped from the sky, landing smack-dab into the middle of a soap opera? Previously, I mentioned my road trip to New Orleans this past week, and maybe I should have mentioned something else.

It is my long-held contention that some areas of the South (in particular the DEEP South) do not have any *normal people living there.

Rather, I believe that much of the Deep South is populated with characters waiting for books to be written about them.

Or perhaps just blogs. I've believed this for a very long time. 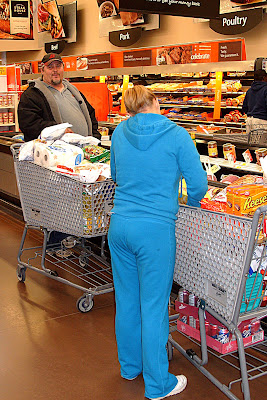 This is Anita Phillips and her husband Allen. I came in contact with the Phillipses in a Walmart (that'd be "Walmarts" for some of us) in Springville, Alabama on Tuesday. They were in the frozen food section. Shouting. At each other. (Dig her blue jumpsuit. I have one of those in fleece wear. Except in mine, I look like Smurfette.)

At first, the noise made me wonder if a fight were about to break out. Then I thought maybe a reality TV show was filming and I'd missed the notices that said "A TV Reality show is filming here today and by walking through this store, you give your implied consent to being part of the show."
But then I realized no, it was that the real life characters upon which George Costanza's parents from NBC's hit sitcom Seinfeld were based, were in fact, walking amongst us.
You remember them, don't you? Frank and Estelle Costanza were portrayed by Jerry Stiller and Estelle Harris as two of the most annoying people you've never met: noisy, bickering, angry and rude. It was almost painful to watch them at times, but yet you couldn't quite take your eyes off them.
Except these two in front of me were not annoying. Anita and Allen were every bit as noisy, which I believe may have distracted me. Being a TV reporter, I'm often distracted by shiny objects on a sidewalk, so imagine the effect of a little noise. Or a lot.
Back to Anita and Allen. Annoying? No, indeed! They were, however, every bit as entertaining as the Costanzas, squabbling over thawing bags of Tater Tots and what kind and how many rolls of paper kitchen towels are needed. It was like being immersed in a bacon-flavored Costanza-rama. Just what is it that charms us about a Southern accent? It makes us want to listen and soak it up just as surely as we like to try biscuits with gravy just because it sounds so unusual yet somehow satisfying. We hear it and our mind sops it up as surely as melting butter soaks into fresh cornbread. It's so sweet on the ear, isn't it? And um, yes, a bit trailer park-y. Yet still we like it. I love it!
So there was Allen, loading an extra pack of frozen burritos into his cart as Anita talked on the phone to the couple's daughter, Brittany, who relayed orders for a more diverse snack spread for viewing the upcoming football game: at least two kinds of crackers to go with the three kinds of chips. 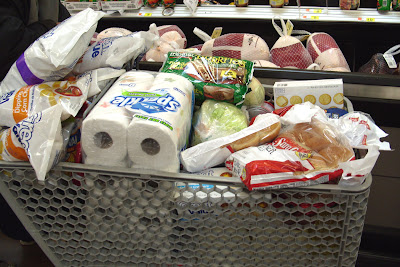 If you notice, both Anita and Allen each have a grocery cart. See the Reese's Peanut Butter Cup dessert boxes below? 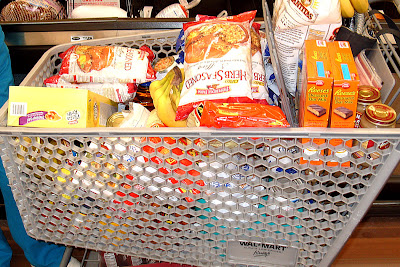 That's Anita's cart. She buys those and makes them for Allen. She admitted that fact with all the coy smiles of a 16 year old about to go to her first prom.

I like this about Southerners. These are folks who until the day they die will call their spouse "Baby." There's something warm, nourishing and right about that. Something that recognizes that the other person is to be babied and cosseted and cherished and loved. 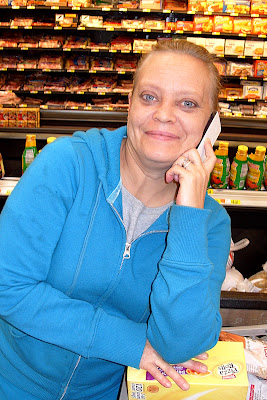 Anita had that going on with Allen over the frozen turkey section. All the while of course, blinking those Big Baby Blues and smiling at him.
As I said, they were sorta yelling over the Totino's pizza rolls when I came around the corner to catch them in mid-sentence. Allen noticed me getting a load of them. (I think it was when the perfect stranger took their picture.) Then I noticed the tone. They were playing, teasing, taunting and flirting with each other over the frosted calzone and a row of stacked Velveeta. (Cheese. Should it be stackable? Discuss.) 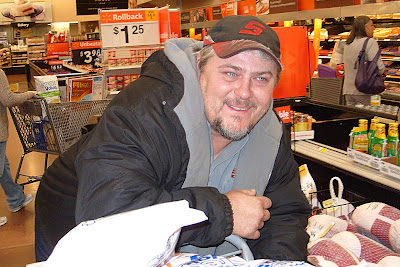 They were communicating. They were discussing what their kids wanted, who needed how many bags of which kind of tortilla chips, what brand of salsa to go with those chips and what to wash it all down. And here's a tip: look how pleased Allen looks to be in a grocery store with his wife. Of 20 years.
And me? I was drinking it in a bit, myself. Awash in a Southern style that is sticky sweet because after all, people are candy. And these two were just a little... nuts. (*Special to Anita Phillips: everyone else who reads this blog knows my definitions. "Normal equals average; average equals mediocre; mediocre equals BORING." Welcome to the fun crowd!)
Posted by Marti at 7:36 PM

But should cheese be stackable outside the refrigerator section? What is Velveeta reeeeeeaaaaaallly made of?

My first encounter with Velveeta was that it was the cheese my Grandpa used to bait his fish hook with....

My grandparents on the other side ate Velveeta. And as for the grandpa you mentioned, I recall his using salmon "caviar," too.
*gulp.

I definitely thought this was going to be a post about http://www.peopleofwalmart.com, but this was even better!

Well, even though I am fairly certain that I am among the mediocre, I will very much so enjoy coming back to your blog and reading away! You have a gift with words!

Oh EEK! No putting one's self down here!

You are MASHED POTATOES, with roasted garlic and lots of butter Amanda!

And the week after Thanksgiving, we all know how indispensible those are!