My Feet Are Not Small 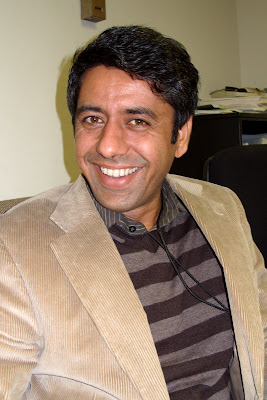 This is Rahman.
If he looks familiar, perhaps it's because you saw him on a "WANTED" poster. In Pakistan. Oh? You've not been there recently? Neither has Rahman. But he's the opposite of a criminal.

Rahman Bunairee sat next to me in digital audio editing class for several days this past week at Voice of America. (This is probably one of the coolest aspects of working at VOA. You never quite know who is around the corner.)

He said "My house was blown up in Pakistan."
Yes, yes, we've all had accidents with the blow dryer and a tub of water. Bad times with a toaster and a butter knife. Life is difficult and confusing, isn't it?

Television reporters are known for sensitivity and tact at such moments, as we all know, right? "Oh, goodness, I'm so sorry that happened to you, but can you tell me exactly what you felt at the moment that you heard your family's home and all its contents had been utterly laid waste by an explosive device made specifically in the hope of killing... YOU?" I promise, I didn't say that. But you thought it was a distinct possibility, didn't you? We're all friends. You can admit it. I can take it.
It took me a bit, but I soon began to have a vague, rather nagging memory... a distant bell tinkling in the back of my mind that let me know I could dig in the far, dimly lit recesses of my mind for the details of what I read on a couple of in-house emails and in the Washington Post.
Rahman was working as a Voice of America journalist in Pakistan. Technically, he was the bureau chief for another television group and did a little work for VOA on the side until after he received a few death threats and his family's house was blown up by the Taliban. Well, that happened to me one time when I... er, no. Never.
Fortunately, neither he nor any of his family were at home at the time that the bomb detonated. The U.S. government immediately brought him to Washington, DC to work and resettle his life as best they could. Not so far, so great, right? But maybe things were looking up. Maybe, except for on arrival, Rahman was taken into custody by federal officers on charges of being a terrorist. Well, not really. They just said that his reason for being in this country was something more than stated on the visa. The visa that the government procured for him.

In journalism, we call that "adding insult to injury."

After a couple of very public statements by someone a lot higher than me at VOA, Rahman was released to restart his life in the United States.

I learned a lot in computer class.

I learned that it's very nice to sit next to the cool guys when in a learning situation. That way, the extraneous lessons in humility are a bit more concentrated.
Posted by Marti at 8:01 PM