Pretty DARN Thankful in the 'Burbs

I have recently acquired a new friend who lives half a world away. He's from the United States, but living in Europe with his wife and stepson. I am sure he felt a more than little wistful this holiday weekend.
So I wrote him a helpful note this Monday after Thanksgiving:

How was your Thanksgiving? Mine was pretty good. Pretty DARN good.

I was invited along by a sweet friend from church to her brother's apartment in Springfield. Hoping to alleviate an overcrowded kitchen, I offered to bring the potatoes and was extremely gratified as the host, his wife AND his mother all commented on my thoughtfulness in taking that particularly onerous chore off their hands. It's always nice to feel appreciated.

The dinner was very nice. My friend and her brother each have been married to their spouses for a little over a year. Their parents were present along with an adult brother. Oh, and the turkey was pretty DARN moist.

And bonus! I found out a couple of weeks ago that one of my two favorite Sunday School Teachers is their cousin. He and his wife and their 7 month old boy were there along with his mother and younger sister. So it was a convivial group that included me in their festivities.

I was the odd girl out. Of course, I'm always the ODD girl. Someone needs to put a post-it note on my forehead: "ODD WOMAN OUT... unless you invite her." Or perhaps they already did? That could explain why I never seem to lack for invitations. Because I am, as you may be realizing, pretty DARN odd.

Anyway, the only problem with this jolly gathering (which spent all afternoon playing WII sports and laughing genially at the results--both good and bad) was that someone... or ones... brought NINE PIES to the party. 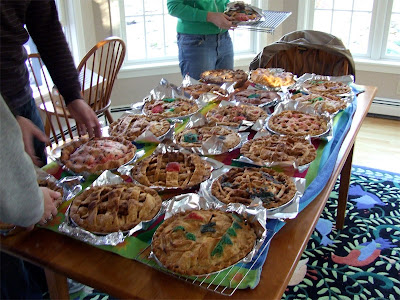 In case you lost count, there were only 12 adults in attendance. And I refused to be accountable for others' unscrupulous over-culinarizing! I did manage to eat a tiny 1/1 inch sliver of the pumpkin cheesecake, banana cream, chocolate and peanut butter pies. BUT THAT WAS IT! My patience and gastrointesti-nullified space simply ceased to cooperate. My waistband simply refused to rise to the occasion.

Most of the afternoon forward, I sat and played with the 7 month old who amused himself by clutching large handfuls of my blonde stuff to use in pulling himself to his feet on my lap.

I think it horrified his parents more than me. My hair is extremely firmly attached, so no worries: I'm not beginning the week bald. And he had such a big handful that it didn't hurt. As long as the little guy wasn't trying make his escape to the ground, clutching and dragging it with him, we were okay. Seriously... he was just using it to steady himself and pretty DARN fortunately, his mother had cleaned all the sticky butternut squash muck off his hands long before he could attempt that. We had a great relationship---my tiny beau and I... until his Daddy came to collect him. Sigh.

I saw him at church again today, but... alas, he was asleep and in another's arms! Well, ok, the "other woman" was his mother. But I really liked him. And his mother. She was a vegetarian, but not an obnoxious one. I've often thought I could convert, except for I can't give up fish. (Note to self: must try blow fish before next Thanksgiving with my family.) And except for how rude I consider it to show up at dinners and parties to demand the accommodating veggie platter, as I've seen some others do. But she was lovely and not demanding at all. She was pretty DARN cool!

She also brought a huge salad. (Why is there never anything green in my teeth? Because I check constantly!) Anyway, I won the door prize: took the salad and four homemade rolls home for leftovers.

Leftovers: the OTHER Thanksgiving tradition.

I haven't gotten a reply back yet. But I have the feeling it will read something like this:

We muddled along another pretty DARN French weekend in Paris. No over-sized, dried out roast bird in sight.

Some things just aren't fair. But between a bird in the homeland and a two-some plus one in Paris, it's truly a difficult call. I hope you all enjoyed the holiday weekend with those you love.

Disclaimer: I did not take the above picture. If one from the actual gathering turns up, I'll post it. Tonio & Katrina: If you have it, please forward it soonest.
Posted by Marti at 10:29 PM

You'd be very welcome here. We like good writers and certainly your own blog would qualify. :)