What Snubbing the Dalai Lama Means to You

The Dalai Lama is in Washington tonight. The exiled spiritual leader of Tibet and past recipient of the U.S. Congressional Gold Medal will meet with politicians, hand out thanks and awards and glad-hand the city's high and mighty. With one very notable exception. 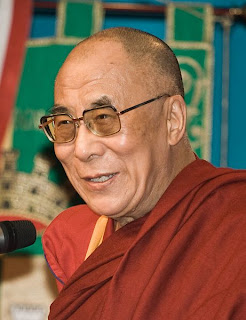 He's not being received by President Barack Obama.
After 18 years of being honored and revered as the walking, talking human personification of the American belief in freedom of religion, he's been turned away at the gate. We, who were supposed to be his greatest supporters, have failed him.
The Obama administration sent a delegation to meet with His holiness at his residence-in-exile in India last month. Afterwards, the Dalai Lama's spokesperson said the Tibetan exile looked forward to meeting President Obama not during this visit, but after Mr. Obama returns from his first presidential visit to Beijing. That key word "after" is very disappointing to Dalai Lama supporters. It allows the Chinese government to say to Tibetans, "See! Those Americans considered our bullying more important than your spiritual freedom."
For the Dalai Lama's part, this is part of being a good sport. On U.S. president's part, it's more like recognition of the New World Order. And Barack Obama is toe-ing the line.

The beauty of Israel is slain upon thy high places: how are the mighty
fallen! Samuel 1:19

I want to be a supporter of this president, but this action gives me serious pause. The strange thing is, the Chinese didn't demand this of the United States. President Obama offered this sizable chunk of diplomatic coin without being asked. We surrendered without firing a shot. Oh, I'm sure there was an implied threat. China routinely punishes nations that receive the Dalai Lama. They refuse to attend conferences and cut off diplomacy. They later reschedule, restore diplomacy and life goes on. So if the punishment is routine, and the Dalai Lama has met with the sitting president of the United States ten times since 1991, then why worry about it now? Very simply, the position of the United States on the world stage has changed. In reviewing the huge debt that nearly crippled the U.S. economy last year, the Chinese have emerged as the single largest holder of that debt. We ought to be dizzy and shaken to our knees by the throttling we are taking. Our own stupid spending has led us down this dark little trail and we may not have seen the depths of it. A second story caught my attention as I flitted around the 'net this afternoon. "U.S. Drops to 13 on List of World's Best Countries to Live in." The second part of the headline was that China has moved up seven places to 92. Yeah, sure you smirk, but the weekend get-togethers on Tiananmen Square are killers. We all know what life on the outside looking in on a Communist Regime looks like, but China has improved living conditions, education, income levels and life expectancy. Think about that as you watch the evening news reports of teacher layoffs and job cutbacks. We're losing our position in world politics. We're losing our standing on world debt markets. And we're tossing out our self-respect by catering to a global bully that kills its own people, dictates religion and family size, and has refused to let an entire section of the country have access to its spiritual leader for the last 50 years. Earlier this year, the Dalai Lama address his 90,000 followers form his home in India and told them to prepare themselves "in case our struggle (with China) goes on for a long time." Sadly, this week our country is working against the oppressed in Tibet; doing the bidding of China, as our new economic taskmaster.
Posted by Marti at 1:59 PM

You are cool, Marti.

Ah, but I don't look as good in jeans and high heels as you, Erin.

Found you through Brooke @ Tongue*n*Cheeky.

I so very much agree! Could have written the same post - albeit less eloquently!

As I survey the political landscape, I just can't shake the feeling that we're forsaking all the things that really matter and pursuing many things that don't!