Sweet Adeline on a Sunday 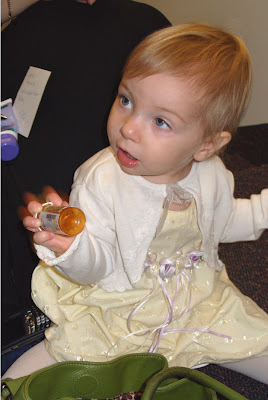 This is Addie. She's not mine. Relax. I'm not announcing anything. She's a "loaner." Her rather exhausted but loving parents who were sitting right around the corner indulged me. She's quite wonderful, although I have known some whose company I have sought out for a more long-term, ongoing relationship, I suppose.
When I arrived (a bit late after having to move my car from a neighborhood that apparently doesn't like its churchhouse neighbors) the building was filled to overflowing. I kept ducking through doors, but seeing no empty chairs, and ducking out again.
So I kept walking further and further back. I finally headed for the stage which I noticed was filled with chairs and people in them. Perhaps one would be empty? No indeed, the stage itself was packed, so I made myself a place on the stairwell. It was quite comfortable and clean, and I plopped down quite content.
At 14 months old, Addie likes to get up and wander around to visit. She shows people various things that she's collected and brought with her. She's even willing, when politely asked, to plop down in one's lap and make herself quite at home.
She likes stuffed animals, keychains, cell phones that light up, and of course, Pepperidge Farm goldfish crackers. Well, who doesn't, right?
She also greatly enjoys emptying purses. Mine is the green one in the foreground. The black blob providing a backdrop is my knees covered by a long crepe skirt that accomodates sitting in stairwells.
The prescription drug bottle she's got her fingers wrapped around, in case you were wondering, is my current "meter money" repository and yes, she was caught in the act of shaking it loudly. "Ching! Ching! Ching!"
Fortunately, I rarely keep my Swarovski crystal in my purse. Since a recent run-in with a metal detector, I also have no sharp objects. It goes without saying that I was even more fortunate to have no bright lipstick or permanent ink markers. Equally marvelous, when Addie is sorting through funny plastic cards in people's wallets, she prefers the brightly-colored grocery store cards to the boring silver credit cards. Whew! And to give her what's due, I confess, after her miniature "tour de force," my purse was showed a marked improvement in organization.
Yes, little Addie (who is about the size of a Polly Pocket doll and shows a similar disposition: she has the personality of a living doll) was kind enough to sit with me during church on Sunday, just in case the speaking up front got a little dry. Addie knows how to liven up her surroundings. She certainly livened up mine.
And then she toddled off, on her merry way. Spreading cheer, and smiles and little bits of goldfish crumbs wherever she went.

I had a great Sunday and hope you did, too.
Posted by Marti at 7:13 PM