Human Candy and the Void

I don't know his name. We never spoke. I don't know if he even noticed me. It was doubtful (in a "not so great neighborhood of south Los Angeles") that he spoke English and the idea of disturbing his peaceful day seemed unnecessary. Besides, he was everything that I needed without rousing him from his quiet reverie. 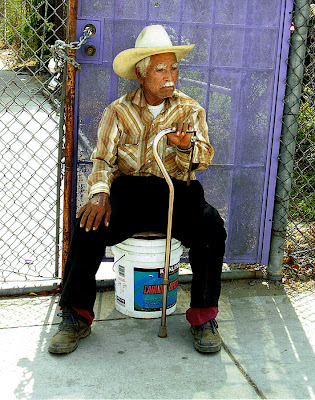 I was surfing the Internet last night, looking for something. I wanted to find that something so much that I almost ached. I kept hopping from website to website, page after page, blog after blog. I peeled through a few favorite aggregaters looking for something to pore over. I visited a few "old favorites," but nothing seemed to do the trick.
I guess we all feel that way sometimes, don't we? We are looking for something but we aren't quite sure what it is and we don't really know where to look.
BBI, (back before the Internet) people, well, mostly teenagers and children really, would stand in front of the refrigerator, open its door and gaze in, "looking for something" within. They weren't really hungry, but they had nothing better to do. They wanted something, but they never seemed sure what it was they were looking for.
These days, one might well wonder if our national weight problem is because we no longer stand at the fridge, but instead put a bowl of chips next to the computer and mindlessly munch while we search the World-wide Web looking for something to fill our emptiness?
Last year, a friend loaned me some books. I was sad at the time and the books she put in my hands helped ease that unhappiness. They were by a woman named Jan Karon and called "The Mitford Series."
Jan Karon describes her writing as finding beauty in the lives of everyday people. She does that stunningly well and if you ever want to read something that can be like salve on a painfully burned (at that time) soul, I highly recommend them. Great for breakups, lost jobs, missed promotions, fallen cakes and burned cookies. They have a simplicity in their approach and are full of the sweetness of small town life. I liked their elegant approach very much.
Last night, as my fingers were busily trying to find something to fill a void and soothe a restless soul, I thought of my trip this past week through New York, New Jersey, Pennsylvania and Maryland. Do you know how many toll booths lie between Washington, DC and Mercerville, New Jersey? About seven, if I counted correctly.
I like toll booths. When you're driving a long distance, they are like tiny shot of humanity. The operators in the booths are generally nice butsomewhat lonely folks, so they are often willing to play along with a bit of loosey-goosey-ness on the part of a solo driver.
I spoke with one toll booth operator named Joe in Pennsylvania. "How are you?" I called out while he made change. He said h'es GREAT. And why not? He has a decent job, three kids and a wife who loves him. Sadly, I didn't get a picture of his beautiful silvery hair.
There was another standout booth operator in New Jersey. His hair was apparently caught in a 1950's time warp. I didn't talk to him because I was taking in that 'do. I didn't get a picture of him, either. I wish I had because I think you would have enjoyed seeing him.
I won't make that mistake again. In reviewing this blog, it's nice that you would read it at all. It's terribly flattering. But I've noticed something: the blogs that get the most response aren't the ones where I study out an issue and post a few of the facts and the silliness that strikes me in it. The blogs that draw the most response out of you are the ones with pictures and commentary from my trips. And the pictures that elicit the most responses are the ones of everyday people that I've snapped a photo and shared a small conversation with.
I am by nature someone who likes to please. And to be honest, I have great fun talking and teasing with the people along my path. It's a huge source of amusement. Perhaps you've noticed? So I think for the next little bit, I will play along. I'll try to take more of my own pictures of the interesting people I meet along the way. We'll see how that goes for a bit, eh? I'll offer a little visual (human) candy, and a little something positive about them. Although sometimes, I'm just going to take pictures because the person is funny looking. You know I can't resist that kind of mischief.
To that end, the above picture is not new. I snapped it from the front seat of a news van parked at the side of a street in South Los Angeles about five years ago. Since then, it's become my favorite. It seems appropriate to start off with him. The photo is titled "Sidewalk Cowboy."
When we drove up, my colleague took the TV station's video camera and went inside the fenced off area behind the man. It was an illegal urban garden, operated by "squatting" gorilla gardeners. They had illegally used the land for more than ten years, with the owners' tacit approval. But now the owners of the land were wanting to develop the property. The gardeners refused to give it up and were attempting to sue for "their rights." It's interesting how some people behave when granted a generous favor, isn't it?
I think that everything I liked about this man is probably visible to you, too. He seems to have lived a full life and now be content to rest for a moment on an upside down rubber bucket on a dirty sidewalk. He seems to have exhausted his emptiness and found contentment. And in his face, I often find a little something to fill my void. Maybe you will, too.
Posted by Marti at 3:24 PM

He looks even better on your blog than in my reader because the orange complements the purple door. He is delightful. This void of which you speak is the reason I follow about 50+ blogs, and sometimes that's still not enough. If I would keep my dishes clean, I bet it would help my mild dissatisfaction.

Oh, thanks Jen! I'll try to "ante up" a little more frequently with such offerings. He really is a favorite.

How uncommonly odd that we both mentioned Mitford today! Aren't we just the darndest?!

Thanks so much for leaving such a kind comment. It was a pleasure and a treat to hear from you. Not to mention the new place I have in my heart for you, my fellow Mitfordite.

I nodded my head all the way through your post. Yes, I've had that "searching for something" feeling. The worst, I say! The worst!

Ahhhhhh, (new) girlfriend! I nag and nag my friends to read those books and they all sorta shuffle off saying they will, but never do.

I think you should make the marmalade cake... and tell me about it. I'm leading a "life sans kitchen" at the moment and I long to live vicariously through other foodies kitchens.

And please... stop by anytime! I'm glad to know I've struck a chord. Hurray me!

Just a note to let you know that Jan Karon enjoyed reading your blogspot, and your comments about the Mitford series. She sends her warm regards and wanted you to know that her daughter was a journalist, and she understands some of the loneliness that comes with that lifestyle. Jan has a wonderful website and invites you to visit at www.mitfordbooks.com

Leave an email addy somewhere/ sometime, "D Wright" so a couple of cyberfriends can telegraph their utter delight something other than mentally?