"It's the Economy, Stupid!" 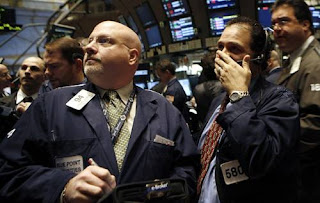 Ha! Okay, but enough is enough, right? Lately, it seems we are all caught up in the pain of watching the markets meltdown.

Or at least some of us are. Others are watching what they believe is the meltdown being brought on by the media.

Some folks say this is being made worse by all the negative reporting going on. Television newscasts that nightly run dramatic "Economic Meltdown" banners while sounding the alarm with very serious background music and the newspaper photographers who seem to capture the most unimaginably negative facial expressions plastered on traders faces as the days events transpire. (Seriously, folks, for all we know, the photograph above was taken when someone dropped a cardboard tray containing four Starbucks cups and a donut. "Not the donut! Catch it! Catch it! For the love of Heaven, CATCH IT!!")

Just now as I walked past my television, NBC interrupted afternoon programming once again to give us the news: The NYSE closed down.... again. It lost another 100+ points.

I must admit that after a week in which the American stock market has lost about a quarter of its value, I don't think that the market being "off another 100+ points" is necessarily news.

I've heard one piece of good advice in the last couple of weeks: don't check your funds and accounts daily. Avert your vision to something more positive. I've found that helps.

Last night's local newscast on the Los Angeles ABC affiliate featured interviews with people who lived through the Great Depression. I know they were trying to be helpful. The interviews all said "This isn't nearly as bad as that." But somehow the knowledge that they were bringing these people forward and reminding me of that very difficult time made things seem all the more painful.

It's a difficult time. We all know that. In the coming weeks, we may see even more painful financial times. (I have no idea. I am NOT a financial analyst, nor do I *ever* claim to be one on TV.)

But better days are ahead. The government's rescue program will have effect on the credit markets. Life will improve once again. And then I think we'll all hope that perhaps this moment in time has it's one potentially positive effect: making Americans respect their earnings again.
Posted by Marti at 1:11 PM