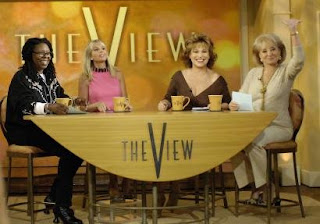 So there they are: the Ladies of The View. It started out as Barbara Walters' innocuous little daytime program inhabited by four women of various opinions and ideologies. But it didn't stay that way for long, did it?

There was Rosie O'Donnell, who scrapped her way to an early out by fighting so viciously with "poor little Elizabeth Hasselbeck" that no one could doubt the air kisses and friendship on air were exactly that: on air.

Rosie left, and Whoopie arrived to fill out the frame. Now we get a daily dose of Whoopie, Joy Behar, Elizabeth Hasselbeck, Sherry Shepherd, and sometimes Walters herself. And the ladies topics have uptick'd, too.

Elizabeth was gone one day this week and to "level the playing field," Walters brought in E.D. Hill from Fox News. Nice, huh?

Except that maybe Walters' math is a bit... off. It's been known to happen among us "media types." Let's take count.

Whoopie Goldberg, who last week suggested that all the banks in this country just drop the interest rates for all those homeowners facing foreclosure. Just drop them. Drop the rates. Drop the profits. Drop the corporate responsibility to all their shareholders. Just drop it.

I'm going to venture out on a limb and chalk her up in the liberal cue.

Joy Behar, who if you've watched any of the shows at all, is so firmly behind Barack Obama as to be almost out in front of him. Same category.

Sherry Shepherd, who has set records for apologizing for statements (often about the other Ladies) spouts off most frequently in favor of Barack. (Isn't it a bit obvious if you're calling someone by their first name?)

By my count, that's four against one. Since Ms. Walters says she was "leveling the playing field" by bringing in E.D. Hill, I must say that's a huge compliment to the often beleaguered Hasselbeck, if Walters thinks four on one is a "level field" in any game.
Posted by Marti at 1:31 PM