As I was laying in bed last night, not sleeping once again, I came up with a new game for myself. You're all about to be gamed. Thank you, as ever, for providing my entertainment. I actually hope you'll enjoy this one, too.I've putzed along with this blog for the last 7-8 months because I've been busy in website development. But I've missed it a lot.In saying that, I'm not saying I'm missing the previous discussions about media, politics, news events and such. They were interesting at the time, but then faded. Much as I think they do in general. But I do miss People providing my daily candy.I used to joke to my coworkers that I didn't "need them. I can do news with or without cameras, video, audiences or ratings. I can blast away all on my own."Those who know me will attest this is true.The truth is, I greatly prefer to have People as my daily candy, but I can also generate the daily sweetness all on my onliest. And I'm going to start. So I'm going to try a daily run of positive writing. I've always suggested that people need to be allowed to try a range of things, good and bad, and work out their bugs while working. Therefore, I'm not going to worry about length, quality (well, that's not true. I think bloggers who aren't polite enough to use a spellcheck are the worst kind of lazy, don't you?) or photographs. I'll try but some of these posts won't lend themselves to pictures. 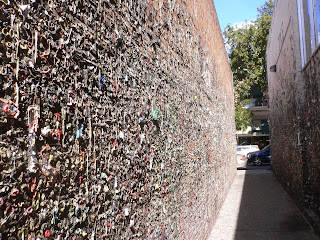 I generally think we get enough scary stuff about the economy, world situation, refugees streaming out of countries that we know we'll never get them to return to in their lifetimes so they'll start demanding stuff in other people's countries to be provided by all other countries, poverty, hunger, famine, dirt, Charle Sheen rants, insect infestations, disease, obvious examples of mental illness masquerading as "winning," poor sportsmanship and gumball shortages elsewhere. But for me? I need an exercise in finding something positive daily.
Please feel free to come along for the ride, if you wish. I think I'll sleep a lot better.
Posted by Marti at 9:57 AM

Terrific idea! I'd love to come along for the ride... btw, who's Charlie Sheen?