I just saw a news promo about a fat cat. 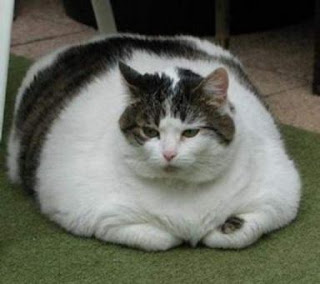 No, literally, a CAT that is FAT. Otto the cat weighs three times what a normal cat would weigh or "500 pounds in human weight." Poor thing couldn't get up on his paws and was being helped to crawl along on some indoor turf. The news story (to be presented on the evening news) was about "What is being done to Save Otto."
Unless Otto has opposable thumbs (making him an evolutionary wonder), he has been badly abused by an owner. Clearly, he didn't get to that size by living off the land, catching and eating mice to grow that girth. Sorta makes me wonder what kind of person would overfeed a beloved pet that way.
I've always heard that cats have an innate signal inside of their head that stops them when they have eaten enough. Have cats now evolved to the point where they don't know they've eaten "enough" and stop? How did they become so much like people?
Yesterday, ThePioneerWoman.com's Ree Drummond announced that she isn't going to post daily on her blog anymore. Yes, she'll post recipes. And photography. And homeschooling stuff, along with her contributors. But in general, after more than four years of posting all her innermost feelings, thoughts, daily mental swervings and such, she's divulged enough. And well, she's got four kids that she loves more than blogging and wants to get back to paying attention to them.
It was the healthiest thing I've seen in a very long time. Ree Drummond has had enough.
I'm still looking for "enough." Thought I found a bit of something a few years back, but he was definitely not going to be enough. In fact, looking back, it seemed like was too much. Wrong stuff altogether.
I turn to the Internet almost daily in a search for "some," but I'm pretty sure "enough" won't be found on Facebook or LinkedIn.com either. It certainly won't be found in 120 character bursts on twitter.com. I do find a great amount of distraction there, particularly just lately. What a wonderful thing to be able to watch the creation of freedom in Africa and the Middle East as it unfolds, right?
I think lots of Americans are feeling the same thing. We're wondering what will be enough for us? Abroad, they seem to be happy just to be free, relieved of dictators and despots in those other countries. But we've had that for a long time and we're no longer satisfied. So what is enough? Where will we find enough? When we do find it, can we afford it? Can we eat it and use it to fill that gnawing ache that wakes us in the middle of the night to wonder whether we'll ever be satisfied? Thought about from that angle, it explains a lot, doesn't it?
I'm sure I don't know. I think a little more "People are Candy" might help fill my void. So we shall see. I do know I like people a great deal more than food and can't ever seem to get enough of you all.
Posted by Marti at 8:00 AM

Poor cat. Shame on his owner.

I know I sometimes struggle to know whether I have enough, too much, or not even close to enough. I struggle with that in many aspects of my life.

Hopefully I will learn the balance to everything before I die.

don't know if you are still following otto, he's lost weight. also, it's not like it's owners were purposefully abusing their pet, they were following the directions on their pet food bag. he's had his diet adjusted and has already lost 6 pounds. seems he just didn't require as much food as the "average" cat.

I made the mistake of following the portion sizes on the cat food bag and my cat is 20 lbs. My vet told me that they cat food bags recommend overfeeding so they don't get sued if your cat ends up malnourished. I wish I had known that 6 years ago . . . now I walk my cat like a dog and it seems to help but he's angry about his diet.

I was told by my vet the portion sizes recommended on bags of cat food are way too large. Apparently they don't want to get sued if your cat ends up malnourished so they recommend overfeeding. Thanks pet food suppliers. Now I have a 20 lb cat, and trust me, he is nowhere near abused. Now he walks on a leash like a dog, which is helping, but he complains daily about his "diet"