I know I said I was going to stick to "people candy," and I meant it. I mean it. But I've been so caught up watching what was going on in the Nation's Capital just lately that I thought I'd explain what has diverted my attention. 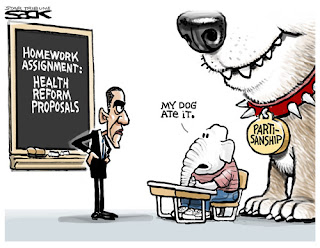 Not in the traditional sense. It's very hard to focus on the health care debate in totem because that piece of legislation is so huge and sprawling that unless you have every second of every day to devote your full attention to it, you miss a lot of it.
I don't have that luxury of brain-drain.

But I am finding some odd similarities between what is going on and another issue in our not-too-distant past.

I want you to think back about a dozen years to the Clinton-Lewinsky investigation and what went on during that time.

As a lot of you know, I don't have a huge amount of political party affiliation in my soul. I just don't. I also have utterly no sense of athletic competition. You could take me out on a tennis court and beat me to death with a tennis ball before I'd ever figure out why I should chase after and swing for it. I don't feel the need to cling to either political party, either. Genetic deficiency on both counts, no doubt.

But during and after the coverage of the Clinton-Lewinsky investigation, I got a good number of angry questions from RED-faced friends, all wanting to know why the media had let Mr. Clinton "slip through our fingers" unimpeached. They generally blamed the media for the failure to prosecute Mr. Clinton for what they perceived his crimes were. (Please don't write to tell me what you perceive his crimes were. I covered that mess for months. It's over. Let's move on.)

I tried to tell them that it wasn't the media's fault that Congress didn't act; it was their own fault. It was the decision of the American public indicated through poll after poll that President Bill Clinton would not be prosecuted because they were tired of the ongoing struggle in Congress. Members of Congress read those polls, along with other surveyed statements, real or implied that the Business of The People needed attending to and that if members of Congress voted President Clinton out, then voters would push them out in the next election.

A very few of my RED-faced acquaintances believed me. Others did not and decided from then on that I was either just another liberal member of the East Coast media elite or stunningly naive. Or both. I've accepted my position in their thinking. (As I said, "it's over. Let's move on.")

Now I am noticing that history may be repeating itself.
Some of my friends are now BLUE in the face from holding their breath for passage of health care reform. Health care reform may or may not pass, but it does seem to be remarkably slow in going through the motions on Capitol Hill.

And it seems possible, according to some media accounts, that Members are starting to figure out that if they vote for and pass the current health care reform legislation, they may find themselves operating outside the Beltway after the next elections. As for me, it all combines to make me feel a bit GREEN... around the gills.
Posted by Marti at 10:07 AM

Throwing the baggards out after the fact will be nice, but not helpful. Like shutting the barn door after the cows have left.

Carla, it's always nice to hear from you, my dear RED-headed stepchild/friend.

But keep in mind. Name-calling only gets you so far. Particularly when you make up the names. ;)

I'm with Carla. I hope the bill fails. I'm extremely angry at my own (D) rep, who went from "opposed" to "undecided" on the same day Obama appointed his brother to a prominent court position. GRRRRRRRRRRRR.

You would call them "baggards," too?

(FYI, Carla found a definition on urban dictionary and now thinks she's more edgy than the rest of us! Which sorta... rocks!
BAGGARD: person who's a jerk, punk, or generally does things that are bad.)