I'm learning. We're all learning, right? I'm learning and today... this was my teacher. 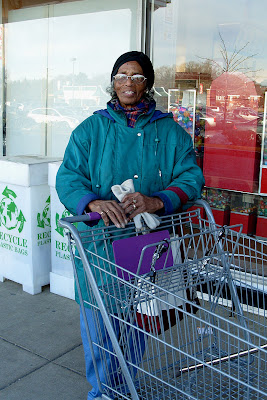 This is Ann Samuel. She's originally from Georgia. I like her face, don't you? It shows that she's really lived. She won't leave empty-handed. And she's not leaving anytime soon. At least I hope not. She seems to have a lot to teach some of us, including me.
Reporters, in case you didn't know it, are feistier some days than others. We pretty much like a little squabbling most of the time, but some days, we are spoiling for a fight. Er, professionally speaking, of course. Oh well.
I went out early Thursday afternoon to pick up my mail and buy some supplies. I was loading those supplies into my car at the pickup curb at an Alexandria, Virginia grocery store. (Grocery stores in VA often don't allow you to cart your groceries to your car, so instead they have drive-up areas where you pickup your groceries.) Suddenly, I heard an elderly male voice, loudly telling me not to use that "yellow curb zone, because it's for handicapped people."
I immediately looked down to check for a wheelchair access ramp. It was forty feet away. And again, I was in the grocery pickup area. I said "Sir, this is the grocery pickup area. It's not an area for handicapped people."

"You should be ashamed of yourself!" He continued. "This is a handicapped area. You should not be here!"
Let me just state for the record, if he had been right, I would have been ashamed of myself. But he wasn't. Still, it brings a certain level of color to my face to be accused of violating the few privileges accorded to a certain segment of the population when I am not. NOT.
"Sir, it's not a handicapped area. There is no handicapped access curb. This is a grocery pickup area."
He started in on me again and I began to realize that perhaps there was another handicap in the process of making itself known.

And then I heard this gentle voice say, "Honey, don't let anyone ruin your day."
The previously mentioned geezer wasn't about to ruin my day, but this sweet little thing was about to make my day. 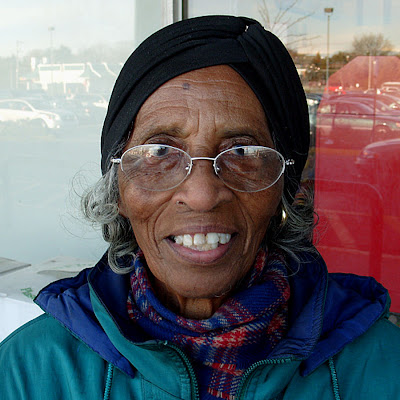 Ann is 89 years old. She was married for most of those years until three years ago. Her husband died that February, just months short of their 61st anniversary in April. She tells me she leads a "blessed life," because although she uses a cane, she can get out and do for herself. I'm guessing she's not the only one whose life was blessed today.

Take another, closer look at that face. And let me point out, you don't get smile lines like those unless you actually smile. A lot.

She let me hug her before I got in the car. I say "let" because I was wearing a big down jacket and looked like a berry-flavored Sta-Puf Marshmallow monster. But she didn't flinch a bit. And I just liked her. Don't you?

That's sweet, old-fashioned homemade honey taffy, is what that is.

Sit a spell and savor it.

Sometimes we find comfort in places you least expect them. I'm sure that you made her day by being interested in her and taking the time to talk to her.

What a kind observation, DellaRae. Thank you for that.

I think she was having a sweet laugh at me (which I don't mind when I'm missing the mark) and I asked for a hug before I fled the scene.

Yep, this is who I would like to be when I'm grown up.
Ya gotta love that sweet face!