2010 NY Resolution: PDAing at the Wheel

It started in 2009, but it ends here and now. I am resolving that from January 1, 2010 forward, I will no longer text or worse while driving.

That's right: I've been doing things worse than texting with my Personal Digital Assistant (PDA) while behind the wheel. (I don't know about you, but I always figured if I ever needed to confess anything about PDA behind the wheel, it wouldn't involve any sort of battery operated gadget or concerns about car chargers. I'm kinda disappointed in myself.) 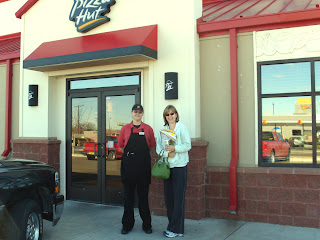 On January 3, 2009, I left Los Angeles for a cross country drive I needed to make. The picture at the right shows me when I stopped for lunch on the second day. I think I was in Tucumcari, New Mexico that day. I rarely stopped for lunch. I rarely stopped for anything. But my problem started when I was only a few miles down the road. I began to suffer separation anxiety. I was worried about being disconnected from the Internet for the roughly 2700 miles of driving ahead.
So I pulled out my PDA and typed "AOL" into the search line. A few seconds later, I saw google.com offering "aol, America Online," and I clicked on that. I logged into my email box and felt the rush! Mmmmm! Hello Lover! I guess you could say I'm an email-addict. I suffer withdrawal symptoms if I don't check email at least once per hour of my day. You know what that's like, right? Wondering if the business email I sent before leaving the house bounced back? Did the product inquiry I made get answered? Has the friend who got a medical test the day before received the results? And of course, how many different Canadian Pharmacies are standing by right now to fill my Viagra order. (Ha! Just checking to see if you're awake!) Considering that I have five email boxes (counting only the ones I regularly check) and two, er, three social network profiles, I am dangerously devoted to my PDA. There is no doubt about how disastrous my nasty habit could be, if allowed to continue. Experts are already saying that texting while driving is actually more dangerous than drunk driving. Numerous states have laws against it. More are making laws. It's bad. I'm bad. Or I was. Add in the fact that I didn't just text and it's true: I was an actual menace. In 2009, I logged on the Internet to surf while making three cross country trips, and usually at high speeds. And every time, I would promise one of my loved ones, "I'll quit. No more emails at 85 mph. I promise!" Except most of the time, I was surfing before I reached the far edge of the little town where they live.
But this will be the year that I stop it. I'm going cold turkey. No more surfing or texting when I am behind the wheel. I would advise you to do the same. Of course, you probably didn't ever hear the siren call of the Internet on your Treo at 80 mph in Kentucky, did you? Nor did it speak to you as you drove... and drove... and drove... across the Texas Panhandle. And it certainly never whispered in your ear outside of Nashville, "Oh, just log on for a moment. It'll only take a few seconds. And then you'll feel so much better. You'll be relaxed and able to drive another couple of hours." I mean it. This is where the going gets tough and the tough get going; where the web link gets cut comple. . .

Sent from my AT&T Wireless Treo as I tra-la-lah'd home from Fawn Grove, PA after a wonderful Christmas with a friend and her family.
Posted by Marti at 7:13 PM

Bahahahaha. I am glad, joyous, and immensely relieved to read this post. I would hate to have to send your Christmas granola to prison for manslaughter via emailing and driving!

Ahhhhhhh, but would you slip a file into the granola bag?

I love the sent from notation at the bottom....hahahaha! :)

I'm wondrously glad to learn that I am not the only email addict in the world. I keep trying to wean myself from it for days at a time, but them I'm back and addicted in a matter of minutes. Igh.

I haven't yet become a texter--praise heaven. Though I feel a great sense of pride that you're trying to swear off of it while driving. I think the entire class full of teenage seminary students over at John's place would agree that it's one-addictable-habit.

Go you! Rock the resolution!

Texting... I am not addicted to.

I am FULL ON, LOGGING ON to the internet while driving. Usually cross country at high speeds.