"Santa-Baby, slip a sable under the tree for me!"

Ah! But which Santa to ask? Walking along the sidewalk in downtown Washington, DC, this was the sight coming our direction: 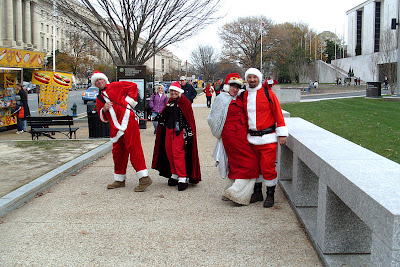 I was with two of my cousins (having a wholesome, family-style celebration in the city) when we were visited by these four personages.

Naturally, I stopped them for a chat. Wouldn't you?
It turns out they came down from Pennsylvania (the Harrisburg area, I believe) for Santa-Con, which is short for Santa Convention. The Santa Convention is a roving party which arrives in major cities bringing the Christmas Spirit (*ahem in copious amounts) to good girls and boys wherever it goes.
For instance, there is a Santa-Con in New York: 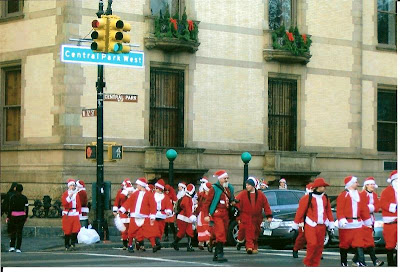 Santa-Con in the Midwest. Branson, Missouri is shown here: 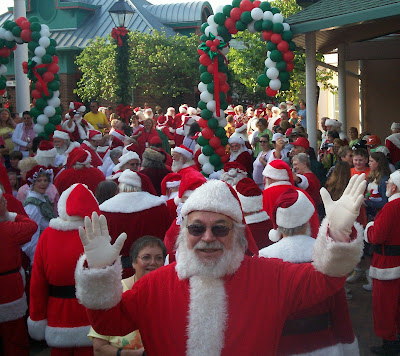 And an international sort-of boat people version of Santa-Con in Copenhagen, Denmark: 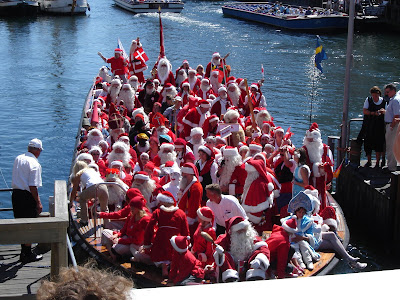 It seems wherever they go, this is what they do: This was in Baltimore's Harborplace. They seem pretty happy and well, you must admit, they brighten up about anyplace they go. Lately, it seems that you are curious how I take these pictures. I get a lot of questions about how I get these pictures and you also wonder why people don't swat me away.
I don't sneak up on them. I just like people. I deeply like all kinds of people. In fact, the more different the person is from me in looks, lifestyle, smell or almost any other aspect, the more interesting I find them. Matter of fact, I'm fascinated by them. Life is short; I'm asking all my questions now. More to the point, I've observed that most people who leave home sporting unusual looks, such as neon-blue-mohawk-hair-and-40-plus-piercings-on-the-subway-in-New York, or perchance a tartan Santa kilt and fur leggings topped off by a Santa Cape walking along in front of the National Museum of American History are the very ones who might welcome some attention. They certainly deserve it, having gone to all that trouble. So I offer it. Once they sense my harmless intent, they open up and also seem to naturally start posing. I think it also goes to how starved we are as a culture for the idea of a genial stranger being kind to us. But for whatever the cause, here's today's offering of the very Spirit of Santa in a Stewart plaid: 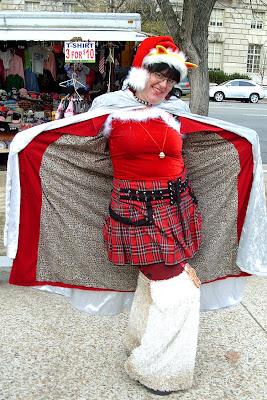 She says her name is Calamity Jane. (Yes, I know she probably has another name. But just because you show everyone what's under the cape doesn't mean you want them to know everything about you. And that's okay, too.) The leggings, CJ said, were salvaged from Burning Man. That statement right there told me the type of Christmas Spirits visiting us: Free sPiriTs.
This is her escort: His name is Richard Karn. (There's a toolbelt joke floating around somewhere, isn't there? If you have it, feel free to add it in the comment section.) With a smile like that, you know he's enjoying himself.
Next is Patchouli. I didn't catch whether she smelled like patchouli; I was, um, standing back and, um, admire. In case you can't tell, there is a prodigious amount of cleavage hidden by that bow-tie and gracious! I stood back in awe! Or something close to it. 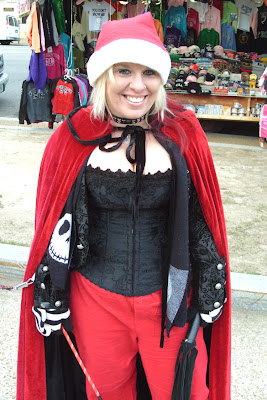 Three piercings, glued on sparkles around her eyes and my goodness, as one of my friends would say "My Patchouli, what BIG EYES you have." As I said, whatever a person puts out, I assume they welcome comments, compliments, questions and all manner of attention on that same matter. Soooooooooo... did you notice the riding crop? What about that leash, which seems to go out of frame and leads to... 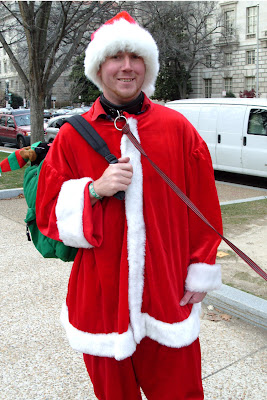 Ken. He seemed the shyest of the group and I noted that with some level of respect. Or something close to it.
As one of the cousins said, "So many Santas! This must be awfully confusing for children." 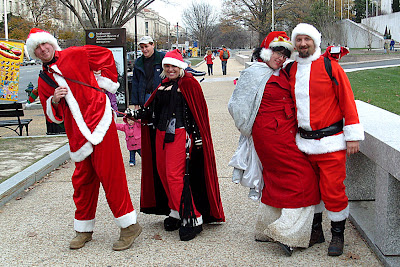 And I heard myself exclaim as they walked out of sight, "Merry Christmas to All; And to All a People-Candy Night!" (By the way, one "Santa" said something about the next one being next weekend in Philly?)
Posted by Marti at 2:56 PM

What exactly is patchouli? Here I go to google it.

Here's where it gets really clever: CLICK ON THE LINK PROVIDED.

Mother may I. I missed this one, Marti. And so am now simultaneously smiling and holding my sides with horrid laughter. What a delicious sight! What a hilarious number of takes on "Santa." People truly are candy, aren't they?

So loving the things you discover.

I think she's long past anyone asking her Mommy. They all were. But wow, they were FUN!