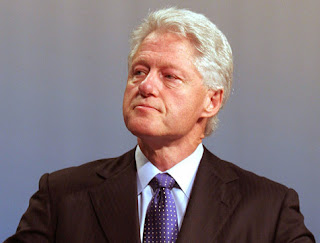 It must be great being Bill Clinton. He gets up in the morning. Scratches himself... as all men do. Or perhaps not. Perhaps he's not a mere mortal man. He says he's been advising our new President, Barack Obama on some "nuts and bolts" about the office. He wouldn't get specific on what his advice was and I'm not going to take the obvious shots here. We'll just move on quickly. But this one I can't resist. Did you see where he said where the recession would not have occurred under his watch? That's okay if you didn't catch it. I've clipped a snippet from a web article about it. Hang on to your hat. This is some mighty wind a-blowin.' Here we go:
Asked his perspective on how the country fell into such economic hard times, Clinton responded in an NBC "Today" show interview by asking rhetorically: "Did any of them seriously believe that if I had been president and my economic team had been in place the last eight years, that this would be taking place." Nevermind that some believe the economic policies enacted and signed into law by him directly led to the sales of mortgages to untold numbers of now very frustrated and angry Americans who couldn't afford them and stand to lose everything.
Nevermind that in the past, he's admitted that his policies and Congressional Democrats greatly added to those very problems. (It's on this blog, but apparently the 42nd President with the legendary memory has apparently forgotten his own words.) Nevermind that experts tell us the economy is a cyclical thing. In fact, the theory of economic cycles would call for a Depression approximately every 70 to 80 years. If you do the math, you'll understand why that's got some folks shaking in their shoes. Nevermind that he thought he could help out in his wife's Presidential campaign. We all saw how that worked out. Nevermind that Bill Clinton is generally ranked in the mid-section of American Presidents. Yes, he did just move up to the ranking of 15th among our 44 leaders. Last week, he was ranked 23rd (technically, the lower half) but now he's 15. And this makes him King? It's good to be King. Let's just don't anybody let it slip to the former president that his throne is now in the bleachers. Kings and gods don't usually sit in the cheap seats.
Posted by Marti at 10:37 AM