I've been thinking about the economy lately. Which puts me in the same boat, bin and bag check as 98.9% of the rest of Americans, right?

At first, I was somewhat depressed. You can get that way, looking at the numbers. But you shouldn't. Why not? I'm so glad you asked.

First off, you shouldn't be depressed because on your worst day (ruling out a death in your immediate family) living in this country, you are still better off than more than 95% of the rest of the world. Truly.

Still panicking? Why? Worried about India? So was I until I hired an Indian team to build my website. Did you know they have 174 "festival days" every year. Can you really get behind that type of work ethic in a modern economy? After a few months of working with them, I stopped seriously considering India as a competitor.

China is what really worries you, right? Have you looked at their numbers and size? Ok, they're huge. But consider this: the U.S. economy is roughly 2.5 times the size of theirs. They're huge, they're coming, but they've got a long way to go. We're experiencing the same level of panic that our grandparents did in worrying about "the Rooskies" in the 1940's and 50's. Inhale. Exhale.

There is enough for them to be successful, too. It's ok. We don't have to clobber them to still have life pretty good.

Now as it relates to the rest of the economy, I have this thought: a sizable amount of the problem with the economy is that we, as Americans, don't have faith in it. We can't afford more government, but cutting our spending will cause an implosion as the nation's (and world's) biggest employer cuts faster than our already overwhelmed employment programs could possibly absorb. 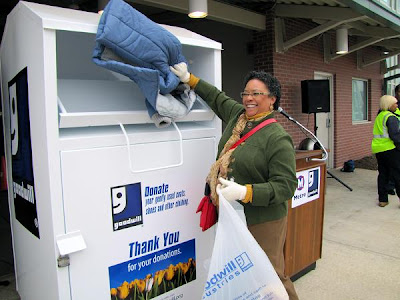 What can we afford? Most of us don't want to spend more. We're saving every penny we've got. Americans are desperately trying to unload debt. We're just having a freak-a-zoid meltdown moment in our national courage level. How do we turn that around?

We're going to have to get tough. And perhaps while we don't want to pay more taxes or spend more money, perhaps its time to do that.

On behalf of those of us who don't want to pay more taxes, how about if we take another positive action? Perhaps if we gave something to someone in need? Since most of us feel like a dollar taxed is a dollar lost to the machine, how about if we take a step forward in consumer confidence, go around the taxing-spending-welfare machine that this country has become and we summon up our courage and faith in the economy to spend something on behalf of our fellow man?

I don't like giving money to people with signs up and their hands out at freeway exits. First off, I'm usually alone in my car and it concerns me to open my purse and my window to a total stranger who looks very different from me and well, somewhat desperate and dirty. I have no idea if he'll spend it on something that he truly needs... or drink it. So I try to make sure that he drinks it. I offer bottled water. If the person is truly needy, he's very grateful for some fresh water. If he's not, then he better act like he is or the guy in the car behind me won't give him a dime.

But how about if each of us bought that person a t-shirt or jacket? We would spend a little more than a bottle of water, but offer something that person truly needs. And more important than an actual t-shirt or coat (in the bigger sense, obviously) we'd circulate the dollars. We'd boost the economy without wasting any money sending the dollars into the expensive to operate government machine, right?

I'm not saying go out and buy someone an expensive coat. Just what you can reasonably afford. What you can freely give. If it comes from Macy's, Walmart or Goodwill, I'm not the person to say. And if you truly can't afford it, then God bless you, keep the money to buy yourself a warm coat. I'm just saying, circulate the money. Skip the government and help your fellow human. And maybe we'll finally start to veer towards easing up on the level of agony we see on the streets.

I'm pretty sure this isn't anywhere close to "The Solution." But I don't see anyone else offering anything better at the moment. (Maybe later this week?) Of course, if you have a better or other solution, I think we're all open to it. Give it up now.
Posted by Marti at 11:53 PM

Very interesting thoughts, Marti. I came across your blog when I was doing a Google search for blog names with the words "Life of Irony" or something to that effect included.