I've been watching the events play out in Tucson along with the rest of the country. Rep. Gabrielle Giffords (D-AZ) being shot, along with more than a dozen other people, has shocked and horrified all of us. It reminds me of other painful times for the United States.It reminds me of the school shootings in Columbine, CO., when I would get up early to watch the news before going to work, and cry my eyes out with sadness that children were shooting each other. I'm generally considered to be a person accustomed to going to tragedies, but that one really bothered me. 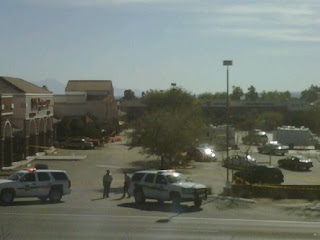 And it reminds me of something I read about Dallas, Texas after President John F. Kennedy was assassinated there. I read that the city felt embarrassed at its part in the death of a U.S. President. They were humiliated at being at the center of the action that so deeply wounded our country.
I see what's going on in Tucson and I think "how embarrassing for Tucson." Arizona has always been one of my favorite states to watch, politically, because they just "call it like they see it." They do what they want, when they want and the way they want, from the border issues to polygamists to how they set their clocks and carry guns. They do what's best for Arizona, whether it works for the rest of the country or not. Call 'em names but don't call 'em late to the party. They get it... they just don't care. You have to sort of respect that type of independence.For some reason, that thinking of their prominent streak of independence that seems to make me sadder for them now. They collected a little part of the blame in this because of those gun laws and unusual immigration tactics.
To be sure, they have some interesting laws in that Western state, but I grew up in a place with trucks and gun racks and men and women who believed in those individual rights. I don't blame guns; I don't blame politics. I blame someone who was not in his right mind. Maybe he can't be blamed because he's incapable of being responsible. What I do know is that it's wrong to try to use rational thinking to interpret a crazy man's actions.But I feel for Arizona and Arizonans and, well, all of us right now. We are better than this. And I hope Tucson remembers that in coming days. They didn't deserve this either.
Photo courtesy of NBC Photographer Brian Humphreys who has been busting his tail for NBC Nightly News all week.
Posted by Marti at 10:41 PM

The political polarizing of this has left me bewildered. Your remarks are right on. How tragic for all.