Isn't it fascinating to see people dressed like characters from a biblical "period movie" holding cell phone cameras over their swathed heads, taking pictures to send to us on the other side of the world? They've brought it all the way from Egypt to our doorstep using their pocket gadgets. You can almost smell the burning building in the New York Times photo below. 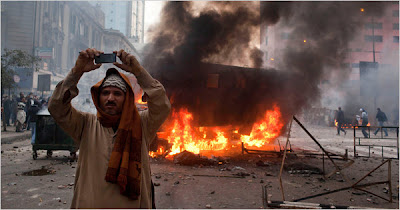 I'm glad they are demonstrating, mostly peacefully, and demanding their rights. I hope they survive to enjoy them.
But I would point out one somewhat painful thing that I find concerning.
For the last several days, one of the commonly heard chants in Egypt has been a demand to know which side the United States is on? Which side is the Obama administration, the U.S. State Department, the big back pocket going to back: Hosni Mubarak or the reformers led by Nobel Peace Laureate, former U.N. official Mohamed ElBaradei?
I was gladdened to hear U.S. Secretary of State Hillary Rodham Clinton and Sen. Mitch McConnell (R-KY) on this weekend's Sunday talk shows, answering questions about that very issue: which side does the United States take. Their answer? It's up to the Egyptian people. It's for the people of Egypt to decide for themselves.
I love that answer. It was a huge relief to hear it and to hear both sides sticking to it. Like glue. Here's my other question. Since when are you asking us to take sides? That is a region of the world strongly influenced by a religion (which is their right, too) that has produced some extremely painful events in the last ten years. They are always suggesting that the United States should not intrude on such things. So it surprised me to see them demanding that we pick a side now.
In another 8 months, we'll mark the ten year anniversary of one of the most difficult moments in our nation's history, the September 11, 2001 terrorist attacks on the United States. It would be great if Egypt was able to mark that date with free and democratic elections and decide for themselves without concern over what the United States is doing.
We wish you well, whatever choice you and your countrymen and women make.
Posted by Marti at 8:40 PM