As you may have noticed, my life is sometimes a bit like a soap opera. So it can't surprise you that I consider most of the people that I meet to be very interesting characters. In fact, people-watching is one of my dearest joys in life. It's how we end up here at People Are Candy with such a plethora of delights!

This is Gordon. He's 6-7. Which is to say, he tells me he's 67 and I'm guessing he's 6'7" in height as well. I'm not quite sure what to make of that perfectly round goose-egg looking thing on the upper portion of his forehead. It was, uhhhhh, actually more pronounced in person. Here's how I came in contact with Gordon: I was in Dupont Circle, having a spot of pizza with a relative who was about to leave the Washington area when I caught a glimpse of Gordon, all 6'7" of him, walking by out in front of the restaurant. "Wow, look at that man! He's totally an eyeful! Isn't he just wonderful!?" My cousin is actually accustomed to my great delight in people who are out of the ordinary, so she turned around to see who was walking down the street. In addition to that sleeveless campshirt, Gordon was wearing khaki shorts and a brownish "nude" colored sock on his right lower leg that made me contemplate whether it was "orthopedic" (support hose?) or an ultra-cool fake lower leg. He had a bit of a "gait" going on. It was all so delicious. I decided I liked him immediately... for a part in the next John Waters' film set in my mind's neighborhood. But too quickly, Gordon lurched off and I lost hope of further relishing his presence.

After dinner, the cousin and I wandered over to Second Story Books (directly across the street from my favorite pizza place ever) and when I walked into there store, Gordon was behind the counter! And when I asked if I might take a few snaps for us, to my utter delight, he graciously agreed. (And before you ask, YES, he does have a left arm. He's just tucked it behind his back.) 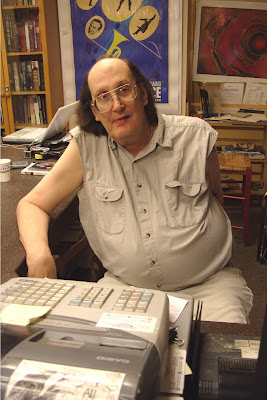 This is when you know someone is The Good Stuff. He said yes. He knows he's a character in someone's "yet to be written book" and is so wonderfully comfortable in his skin. He has a bit of a gentle way about him. It was possible to like him immensely, so I did. How could I not?

Gordon told me he's lived in Washington for all his 67 years. He doesn't own Second Story, but he's been working there for a very long time.

I may need to go back and buy a book. If you go into Second Story Books in Dupont Circle, be especially nice to Gordon. He'll likely be a famous movie star some day.