I went to get my hair cut and my car worked on yesterday, and I came away with a good bit more. My hair appointment was about 90 minutes north of Washington, DC in Towson, Maryland. (Towson is not a great mecca of hair styling, but the closest one of those, near as I can tell, is in Los Angeles. Suffer with me here.) (And, no, you aren't entitled to a look. It's just hair.) After the hair appointment, I drove to the mechanic's house. He lives with his mother. That's actually one of my favorite things about him. He's the son of a friend who I like to beg into doing my mechanical stuff. He's willing to do it, and I pay him a nominal fee for his particular grease-monkeying.
This particular day, he finished the mechanics and tossed in removing a screw that I had stripped. As it turns out, I'm quite good at stripping screws. He expressed his admiration. I expressed my cash. Everybody's happy. Except on the way in, I had seen this little arrangement off of a wayside church. 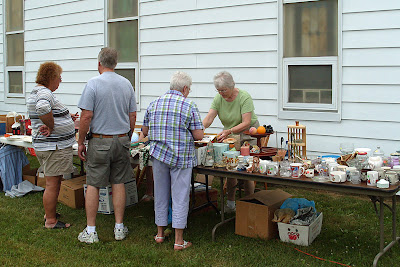 Having grown up in a small town, I can't resist a gathering of gentle folk at a small country church. Toss in barbecue and I'm a goner. I asked the mechanic. Sure enough, he was game. After the car repairs, off we went. Here he is, with his plate, waiting on me to get my barbecue sandwich so we could find a table to dine. He looks pretty reasonably happy, doesn't he? You can tell it's not a date with that stack of onions! (And he's recently engaged. Congratulations, Grant and Taylor!) This next picture is the server. 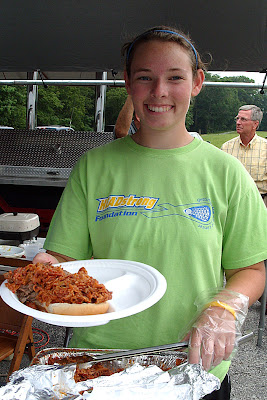 I forgot her name, but I won't forget that grin. Or her generosity. That's MY plate. You think maybe the mechanic and I should have swapped plates? My gracious, what a little chitty-chat will do for the person wielding the barbecue tongs! All I did was ask for a taste of each, and pretty quick, I had a plate full of both! 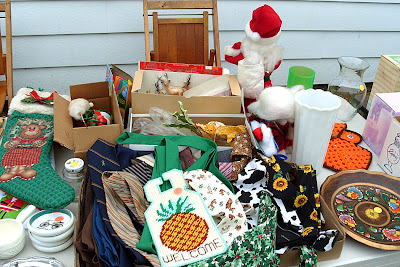 Along the way to the seating area, we dawdled along the rummage sale. Some homemade goods, some far away stuff and lots of the usual suspects. 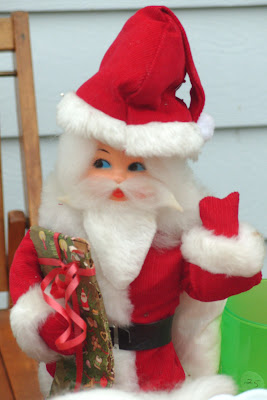 This Santa Claus figure caught my eye. He looks like he's trying to hook a ride, doesn't he? But he did not come home with me. And then I caught sight of this little game: 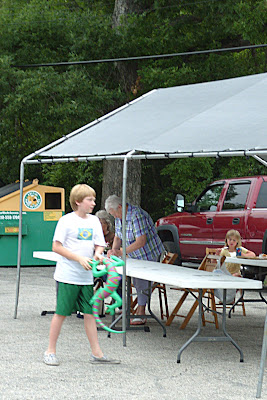 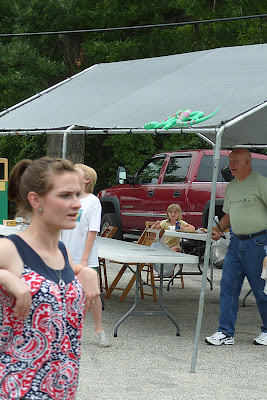 The inflatable alligator lands on top of the barbecue stand. I'm not sure what the game was here exactly, but it seemed to be irresistable. 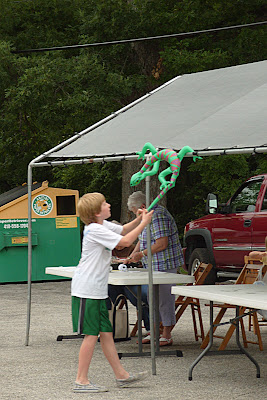 Maybe you had to be there. You wish you had been, don't you? 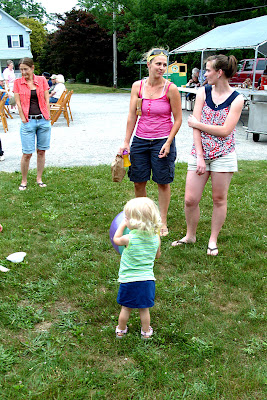 I love a little country gathering, with families wandering throughout the entire scene. And me and the mechanic, enjoying the barbecue and the air out there. All in all, I got a good deal more than just the great deal on automotive work and hairstyling.
Posted by Marti at 2:10 PM