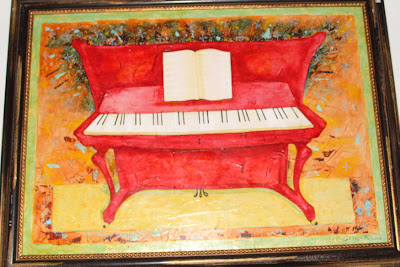 An hour later, I walked out with it. It is titled "Mamuut Red" by George Khubua, who is a Georgian (as in former Soviet Republic of Georgia) artist. It's painted in oil on canvas.When I got it home, I discovered a little stash of guilt, tucked behind the frame. Not gilt. Not geldt. Not anything of value, just guilt. Why? At $60, it's hardly likely to crash the budget.
I feel guilty because I have worked to maintain a household that I can walk away from on a moment's notice. I have endeavored not to fill the holes in my life with "stuff" that will never be satisfying. I've curried the notion that I had no commitments and remained foot-loose and fancy free.Some of you may know that currently, I don't have a bed where I live. There is also no couch. I haven't had the sense to buy a set of flatware, glasses that match, more than three dinner plates or a can-opener that isn't second-hand. Yet two nights ago, I bought this painting. I do like an uncontrollable smile, though, at least once a day. Don't you? Don't we all like a little visual on happiness? This little red piano makes me smile. I wish I hadn't been sucked in by it, because it is what it is which is something I'm responsible for. I think if I could stop feeling guilty, I might smile more.
Posted by Marti at 11:06 AM

..."walk away from at a moment's notice"... "not to fill my life with stuff"... Methinks this charming painting fills the bill.
Everyone needs a red piano in their life, and you've found yours. It's an omen hanging on your wall.
Don't ride the great cruise without indulging in the buffet.

Which cruise do I want to take next?

I've got some options. They're all fairly amazing and extremely appealing adventures, but I think they might be mutually exclusive and there is nothing I dislike more than regret. I don't want to miss out on ANYTHING.

My mother told me something when I was in 8th grade that stuck with me. I came home from my first jr. high school dance and she said "Did you dance?" I said "no." She asked what I had done all night? I said I walked around. Here's her advice: Stand in one place and you'll get asked to dance.

That actually is one of the great truths of life. The problem with me is... I like to move around. We'll see. :)

Just for the fun of it, I'm going to allow foreign language comments in on this blog for a bit. (I'll try to knock out the porn-connects.) And I'll try to stay up with the translation.

"Jason Birk" posted a readable one... which sort of makes sense.

Following him, 賢林賢林 offered a comment which translates to "To help you look at popular impulse to help you Tuitui Tui."

(All translations are courtesy of Google, which also will offer an audible for the reading-impaired, if you are interested.)

So... a friend at work translated 賢林賢林's comment and she says what it means was to give you "help with the popularity of the site."

She also said that based on the accent of the name, the writer was from Taiwan, not Mainland China.

(It would seem I am somewhat popular in Asia.)